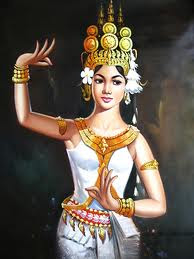 Cambodian culture and artistic expression were overshadowed by the greatness of the past. Although the Khmer empire owed much to Indian influence, its achievements represented original contributions to Asian civilization. The magnificent architecture and sculpture of the Angkor period (802–1432), as seen in the temple complexes at Angkor Wat and Angkor Thom (see photograph), marked the apex of Khmer creativity. Following the capture of Angkor by the Thai (15th century) and the crumbling of the empire, the region underwent four centuries of foreign invasions, civil war, and widespread depopulation. It was not until the establishment of the French protectorate in 1863 that internal security was restored, the country's borders were stabilized, and efforts were undertaken to revive traditional Khmer art form.

At varying times, Cambodian culture also absorbed Javanese, Chinese, and Thai influences. Between the 9th and 15th centuries, a prosperous and powerful empire flourished in northwestern Cambodia. The Khmer kingdom of Angkor, named for its capital city, dominated much of what is now Laos, Vietnam, and Thailand. The kingdom drew its religious and political inspiration from India. The literary language of the court was Sanskrit; the spoken language was Khmer. Massive temples from this period, including Angkor Wat and the Bayon at Angkor Thum, testify to the power of Angkor and the grandeur of its architecture and decorative art. The unparalleled achievements in art, architecture, music, and dance during this period served as models for later cultural development in Cambodia.


Music occupied a dominant place in traditional Cambodian culture. It was sung and played everywhere—by children at play, by adults at work, by young men and women while courting—and invariably was part of the many celebrations and festivals that took place throughout the year at Buddhist temples in the rural countryside. Instruments used in full orchestras included xylophones with wooden or metal bars, one- and two-stringed violins, wooden flutes, oboes, and drums of different sizes. The players followed the lead of one instrument, usually the xylophone, and improvised as they wished.
Posted by whisper-from-heart at 7:25 PM 6 comments:

Email ThisBlogThis!Share to TwitterShare to FacebookShare to Pinterest
Labels: About Cambodia Culture

The culture of Cambodia has had a rich and varied history dating back many centuries, and has been heavily influenced by India and China. Throughout Cambodia's long history, a major source of inspiration was from religion. Throughout nearly two millennium, Cambodians developed a unique Khmer belief from the syncreticism of indigenous animistic beliefs and the Indian religions of Buddhism and Hinduism.

Indian culture and civilization, including its language and arts reached mainland Southeast Asia around the 1st century AD. It is generally believed that seafaring merchants brought Indian customs and culture to ports along the Gulf of Thailand and the Pacific while trading with China. The first state to benefit from this was Funan.

The golden age of Cambodia was between the 9th and 14th century, during the Angkor period, during which it was a powerful and prosperous empire that flourished and dominated almost all of inland south east Asia. However, Angkor would eventually collapse after much in-fighting between royalty and constant warring with its increasingly powerful neighbors, notably Siam and Dai Viet. Many temples from this period however, like Bayon and Angkor Wat still remain today, scattered throughout Thailand, Cambodia, Laos, and Vietnam as a reminder of the grandeur of Khmer arts and culture. Cambodia's unparalleled achievements in art, architectures, music, and dance during this period have had a great influence on many neighboring kingdoms, namely Thailand and Laos. The affect of Angkorian culture can still be seen today in those countries, as they share many close characteristics with current-day Cambodia.
Posted by whisper-from-heart at 7:20 PM 6 comments:


If you need a link with us, please contact us now by email: theangkor[@]yahoo.com or connect with : Facebook 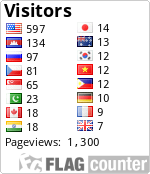